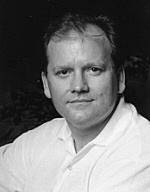 I've just sold a prose short story -- meaning they've just emailed me to notify me of their acceptance of it -- to intrepid science fiction editors Gardner Dozois (pictured far left) and Jonathan Strahan (pictured near left). The story is called Fearless Space Pirates of the Outer Rings and will be included in the anthology called The New Space Opera 2, sometime in 2009. It's a collection of all new space opera stories, which you might have gleaned from the book title. The first New Space Opera anthology, also edited by Dozois and Strahan, was published in June of 2007 by Eos, and features a small galaxy of fine authors. I suspect you can still find it at Amazon.com.
My story you can steadfastly fit into the sub, sub-genre that my old Army buddy John Baker used to describe as (wry, dismissive voice here), "Oh it's another one of those books about musclebound spacemen with lasers and swords." Yes, John old pal, that's exactly what it is, and proudly so.
Posted by Bill Willingham at 4:11 PM