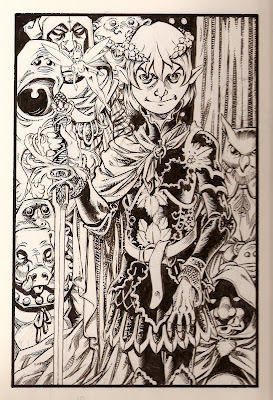 Since it now looks as if it will be a long time coming before Peter Pan gets to join the cast of Fables -- if ever -- I decided I might as well finally share this character design drawing with you, since it won't likely ever see publication elsewhere. Some of you might recall seeing the character design sketches I did to accompany the original Fables proposal. They were published in the back of the second Fables collection. This depiction of Peter Pan as the Adversary was among them when I first submitted the proposal to DC/Vertigo. It depicts Peter as not only the Adversary, but as the Emperor too. Unlike Geppetto, Peter never would have been content with simply being the anonymous power behind the throne -- behind thousands of thrones.
In showing Peter among select members of his corrupt and sybaritic court, I was trying for a hint of the look of a young Christopher Plummer, playing the evil emperor Commodus in the 1964 Fall of the Roman Empire (of which the hit movie Gladiator -- at least in the first third -- was nearly a shot-by-shot remake). Plummer captured and portrayed a truly creepy villain. Joaquin Phoenix, for all of his skills and talents, couldn't come close to Plummer's note-perfect portrayal of the same character. Then again, Richard Harris, giant of a man that he was, couldn't match Alec Guinness in the role of Marcus Aurelius. Gladiator had two strikes against it from the get go.
But back to Peter: Actually, I'm not sure I have anything more to say about this subject or this sketch for now, so I guess I'll let you go early today.
Posted by Bill Willingham at 6:56 PM

Everything could have been very diferent.
Really impressive design for Peter.

Interesting!
Re-imaginings can be fun :)

Also, for a new Peter Pan adventure that's faithful to Barrie's original stories and based on his idea for more, click my name.

Look at that! My first self-promotion-ad comment. This is a real blog!

That sketch is so awesomely amazing. That is a real treasure for Fables art.

This was a great post, Bill. We got to see what Pan looked like toy ou and learn a bit about him as well.