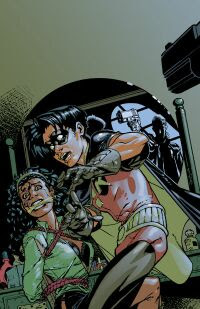 Knowing your reticence to some of the more uncouth portions of the internet, you may be interested in this article about how the broken-windows-theory applies online?

(If I may, your Fabletown forums have not devolved into anarchy, which I tend to think is partially because you prefer to keep them in check, protestations against curtailing free speech/censorhip be damned).

These past two blogs on Robin has made me really want to track your run on it down. I loved the Tim Drake character, but stopped reading the comic years ago. Perhaps I'll track down a few of your issues.

And, wow, you were a Military Police? You must have some pretty exciting stories from that time!

For the most part my MP days were far too much fun. Know anyone else who had to pull over and ticket a main battle tank for speeding?

And Juan, I'm all for free speech, but nothing in that law requires that I have to provide a platform for it.

Uhhh, ok (that article really didn't mention any laws - it just mentioned how the internet devolves into a chaotic state when "broken windows" are allowed in a forum, blog or chat, which got me to thinking of how your forum has been very civil. I think that civility is the by-product of your running a very tight ship, though yes, I agree that it's your ship and you don't have to run it / be a platform to people who aren't willing to follow the rules).

True, Juan, and I think the "broken windows" analogy has some truth to it. It actually doesn't take much at all to enforce a minimum of civility in any forum, and I also think, once people learn there are going to be rules, they're pretty good at policing themselves.