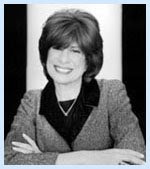 Jenette Kahn. She's had so many careers that, even limiting myself to those careers that were gloriously, unconditionally successful, I couldn't begin to list them all. So I'll confine myself to a few select areas wherein I've had direct interaction with her.
Once upon a time Jenette ran DC Comics, as publisher and various other titles (if memory serves). She was still in that position (she'd announced her retirement by then, but wasn't quite out the door) when I first pitched Fables to DC/Vertigo. Jenette immediately made herself a champion of the series and is one of the those most directly responsible for the fact that DC accepted the series without too much fuss. So I owe Jenette.
Following DC she set out for Hollywood to embark on another career. In partnership with Adam Richman (Hi, Adam), she formed Double Nickel Entertainment, becoming a big shot Hollywood mogul. Except that she's too nice. I haven't met too many big time Hollywood moguls, but they're supposed to be self-impressed spoiled, tantrum-throwing dictators, so I don't think Jenette is doing it right. She's much too generous, kind and interested in getting the most from the people she works with, actually treating them well in order to accomplish it.
Almost as soon as her production company was formed, Jenette partnered up with Jim Henson Pictures in the first attempt to bring Fables to the big screen. That project didn't work out, for various reasons having nothing to do with Double Nickel or Lisa Henson, who's the boss of Jim Henson Pictures.
If you want to see what Jenette and Double Nickel is able to bring to the big screen, go see the new (opening soon) Clint Eastwood movie Gran Torino. That's a Double Nickel production. How cool is it that the first major release from the production company is already being talked about as a candidate for multiple Oscars next year? Way to go, Jenette.
She doesn't remember (or claims not to recall) how we first met. In 1984 or perhaps '85, DC Comics held their annual Christmas party at a trendy New York spot called The Automat, designed after those ubiquitous automat restaurants that used to dot the city, back in the old black and white movie days. I wasn't working with DC back then, but I was working with Comico, doing a series called the Elementals. But DC and Comico had good relations at the time and so we were invited up from Philadelphia to join the party. It was snowing hard that evening and so those of us who took the train up from Philly were dressed for the weather. To be specific, I was wearing big, heavy ex-Army snow-stomper boots, which weren't the best shoes for the dance floor. Yes, I danced that night. It only happens when I'm supremely drunk and I was indeed truly blasted that night. At some point I was actually dancing with Jenette and, unknown to me, stomping all over her feet with my big old Army boots. I learned of this when Paul Levitz kindly and discretely escorted me off of the dance stage, sagely advising me that, "Perhaps it would be a good idea if you stayed off of the dance floor for the rest of the evening." That's right. Paul Levitz (Hi, Paul) banned me from dancing. It must have been a permanent thing, because I haven't danced since (and won't).
One digression of note: At the same Christmas party, DC had hired two lovely young women whose job was to dance with reluctant employees and freelancers. One was dressed as Santa and the other dressed as one of Santa's elves. Later in the evening they switched to being dressed as a devil and angel. Throughout the evening, at several times, I noticed them literally dragging folks out onto the dance floor. That's right. Knowing they worked with people who were, to be kind, a bit more than socially inept, DC hired mercy dancers. One of the Comico folks from Philly, Dan Smeddy (the funniest human being who ever has and ever will exist) was scolded for hogging the (far too lovely to be real) mercy dancers all night. And he was indeed hogging them. By the end of the night he was the one literally having to drag them onto the dance floor. Later that night, after insisting I could make my way on foot to the train station (all of the other Comico people had left hours earlier) I blanked out for a bit and woke up in Chinatown, which is clear across town from the Automat or the train station, which was only a few short blocks away from the Automat. To this day I have no idea how I got there, or what I planned to do there.
Anyway, back to Jenette. She graciously claims not to recall that I stomped all over her feet that night, until I had to be banned from the dance floor. Shortly after that DC stopped having public Christmas parties. Coincidence? I doubt it. But the very first time I came into the DC offices, following the beginning of the Fables series, Jenette was wearing a cast on one foot. Coincidence? I doubt it.
But let's move on. Jenette Kahn is, for all of the reasons I've outlined above, and for many more reasons too numerous to list, a truly Fine Fellow.
Posted by Bill Willingham at 9:13 AM

I definitely plan on seeing Gran Torino. It looks really good and it's hard to say no to Eastwood.

"I blanked out for a bit and woke up in Chinatown"
Have mercy! With stories like that in your past I guess we need to count ourselves lucky that you are still around, Bill.

I thought the punchline of the "mercy dancers" story is that one of them was going to turn out to be Shelley (Roeburg) Bond.

No, this was pre-Shelly joining DC, and these were giggly, bubbly party girl types -- the exact type of girl one wants as a hired Mercy Dancer, if one is going to be crude enough to hire such people.

Note that next year there was no Mercy Dancers hired, and, if I recall correctly, that was when Shelly had been hired up at DC. Coincidence? Hmmmmm.

And the "blanked out and woke up in Chinatown" story doesn't even come close to being one of the really close calls in my life. Someday I'll tell the "God tried to kill me in Germany and only missed by inches" story. Now that was touch and go.

Being vain and bored, I googled my name and it popped up on your blog! I was stunned and amazed. I remember that Xmas party . I was forewarned by everybody NOT to ask Ms. Kahn to dance, so for her I was a good boy. I also remember Howard Chaykin pointing to me and the girls on the dance floor and asking "Who is that guy?" Good times. Much love and continued success to you, my friend.