The most in thirty years 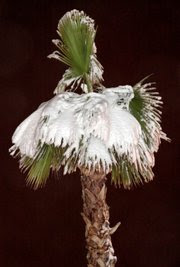 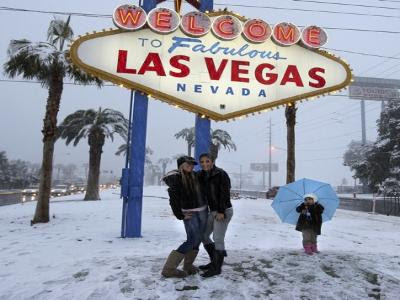 It started snowing here in Las Vegas mid afternoon today and it's been going strong all day. By 3 PM there was enough to make a good snowball. By 6 there was enough accumulation to build a snowman. By morning we should have a good six to eight inches of it on the Strip.
The Las Vegas airport is closed. Drivers who've never in their lives had to drive in snow are crashing into each other in truly impressive numbers. So far there've been no reports of cannibalism -- at least no widespread cannibalism (Okay fine! I ate a foot! A single human foot! But it was me or her and the old biddy had had a good long life, and it's not as if she ever went anywhere on foot anyway! She took that giant boat of a rusty old Plymouth with her everywhere, and still can!). 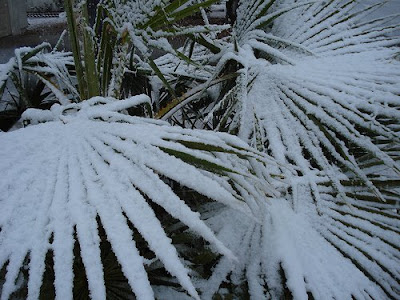 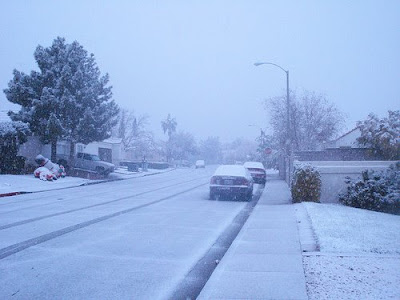 Of course this only further proves what our top (non-politically aligned) scientists, like Al Gore, have been saying all along. Man caused global warming is about to crush human civilization for all time and at last rescue our long dying planet from the pestilence of our infestation. If only we'd gone socialist sooner. Thank Gaea our financial crisis has wrested our top industries out of greedy capitalists hands and forced a sane legislature to start nationalizing everything. 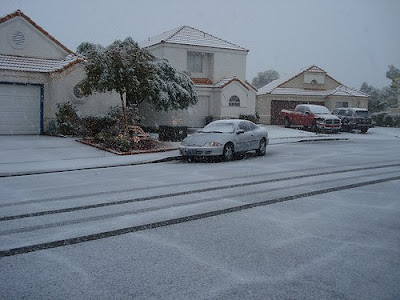 Still, it's awful pretty.
Posted by Bill Willingham at 7:23 PM

Labels: End of the World

Fresh snow is very pretty. I always like to watch it fall. How did the snowman turn out?

Since I left all pairs of gloves up in Minnesota, knowing I'd be back there in a few months, the snowman is taking time between trips inside to recover feeling in my fingers.

It's a work in progress.

It snowed here in Jersey too. Boy, was I surprised when it took much, much longer to brake than I'm used to! Fortunately I didn't crash into anything.

But now I'm quite curious - Are you a follower of the Calvin and Hobbes school of Snow Sculpture?

While I was inside, warming up for the next forray out to finish my snowman, the parts of my snowman were cannibalized for a few other snowmen under construction.

"Sorry, Mister. We thought you gave up on yours."

Brad Thomte and I did an informal snowmen in Vegas survey today, while we were out finishing our Christmas shopping and they were everywhere. Las Vegas really turned out and did their duty in the one day of snowman technology available to them.

Good on you, Las Vegans!

And I suppose I'm sort of happy that my snowman's organs were able to keep three or four other snowmen alive. One of the snowmen mine donated parts to is still going strong -- even after a brutal day of sun.

Vegas in snow is glorious! We saw Sunset Park invaded by snowmen like some Rankin/Bass horror movie.

Posts like this are the reason I love ya, Bill.

I was in Vegas this summer with my girlfriend -- I can't even fathom that 111-degree convection oven covered under a blanket of snow. Wow.