And yet another JSA favorite 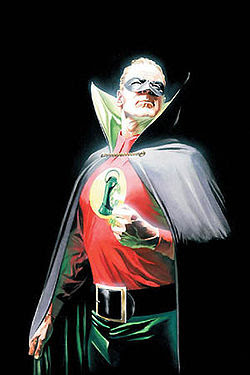 Alan Scott, the Golden Age Green Lantern is going to play a pretty big part in my half of the JSA series.
Here are a few carefully worded bits and pieces of the plans Matt and I have worked out. Of course this is all subject to changes down the road, when we learn that the next big DC crossover involves turning the entire line over to some hot young tyro from Hollywood or Real Books who plans to kill all of the JSA (stuffing the bodies of the women into refrigerators and the chopped up bodies of the men into tool boxes) and replace them with super powered badgers. But barring that we plan to:
First arc. A big thing happens, but we also get all of the characters into position for the really big thing that happens next.
In the second arc, Obsidian and Mr. Terrific are the prime movers of the plot and (in at least one case) the source of the jeopardy.
In the third arc, it's all about Green Lantern (whom I will not continue calling the Golden Age Green Lantern, since he's the original and the other Green Lanterns should call themselves the Green Lantern Copies, or the Green Xeroxes, or some such). Of course none of this implies that the other characters won't be important, just that we want each character to have a particular moment in the spotlight.
Hold on. Wait a moment. I just heard that Matt Sturges may have other plans for the next two arcs following the first (which we are writing now). Hmmm. Maybe you'd best treat the above plans as tentative until I work things out with the enthusiastic young scribe.
Posted by Bill Willingham at 7:18 PM

My enthusiasm can only be described as "unbridled." There's not a single bridle anywhere to be found on it.

I'm not entirely sure that I've ever experienced unbridled enthusiasm, Matt. It's always been bridled. Sometimes multi-bridled.

YEAH! THE REAL GREEN LANTERN! I love it! I'm so excited you guys are writing this title!

Aw, man! I want to see your stuff on the stands next month!!!!

Mark Finn just passed the good word to me that you (& Matt) would be taking over JSA. I was so excited that I momentarily forgot how much I hate you for being just so damned clever all the freakin' time!
I also hate that we have lost touch so badly over the years.

Anyway, just wanted to send my well wishes to you and Matt.

And just for the record...Alan Scott is one of my top faves also. If DC wants a Sentinel, let it be someone that Alan is training to replace him or something.
(And make DC quit making those guys yound again...that's just stupid.)
---Weldon Adams,
Somewhere in Texas