The Fires at Story Creek 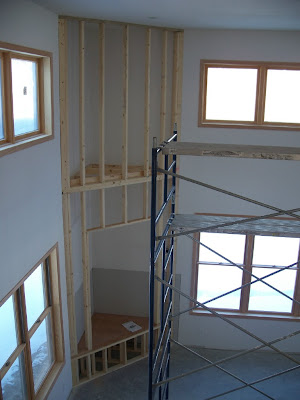 The contractors are moving along rapidly now. Here's the framing of the wood burning fireplace that's going into the living room. The finished fireplace will be real stone, matching the stone floor.
Stacy Sinner, the wife of my long time Army buddy Mike Sinner, is overseeing the finish of the house while I'm wintering (for my last winter) in Las Vegas. It's several degrees below zero up there in Minnesota. It's so chilly here in Vegas that I actually had to consider putting on a longer sleeved shirt the other night to venture outdoors.
When she's not doing custom house completions, Stacy is the Director of Adult Corrections for Olmstead County. This makes her the second highest Olmstead County law enforcement official behind the sheriff. Mike is the Director of Juvenile Corrections for the same county. I'd like to imagine they first met during a prisoner transfer, when a dangerous juvenile offender who reached the age of 18 was being handed over to his new digs.
Posted by Bill Willingham at 12:43 PM

No doubt met while he was incarcerated in jail on his drunk driving conviction!!!!