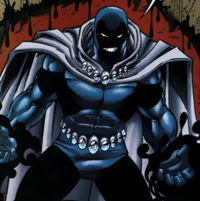 Obsidian was a favorite character of mine ever since I first saw him, long before I had any idea who he was or what he could do. Why? I think visually he's among a handful of the best designed superheroes ever.
Then when I learned that he's the son of the original Green Lantern and that his powers are basically the same, except with solidified darkness rather than green light, then that sealed the deal. Obsidian's going to be a big part in my JSA plans.
He hasn't taken a very active role in recent issues, being more of a "living security system" plot device. That's fine. Geoff Johns did me a huge favor by basically letting him lie fallow for some time. Now, when he returns to the forefront, he can return rejuvenated -- sort of like how a favorite food tastes even better when you haven't had it for awhile.
Posted by Bill Willingham at 5:10 PM

Did you know he was a featured supporting player in Marc Andreyko's MANHUNTER book?

Do you plan on referencing his friendship with Kate, life in LA, or relationship with Damon?