Not a single shot fired this time. 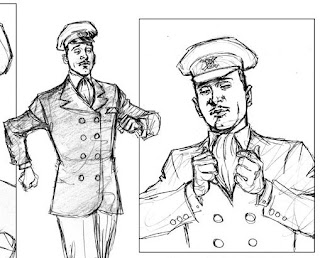 Matt Sturges came into town for a three day mini writing camp. In that time we wrote two issues of the Great Fables Crossover, tweaked a few finishing touches into our first JSA issue, broke down our second JSA issue, and actually had a few hours for sleep and the odd meal or two.
Not bad, considering that the last time Matt came into Las Vegas for a similar concentrated work retreat, we did anything but work. We hung out at Sunset and Vines -- a wine bar and restaurant that I own a modest piece of -- swilling good wine and dining on good food. We fired tommy guns, modern machine guns, silenced pistols, sniper rifles and various other implements of death and destruction at a local gun range (and mostly shot at one of their "pick your favorite villain" targets, with the image of a fellow that looked disturbingly -- or delightfully -- like DC Comics' own Dan Didio). Oh how we filled Dan full of holes! We played poker. We saw the sights. And even drove to LA for a day of signings and musings at the LA book fair. What we didn't do then is get a single bit of work done -- the planned reason for the visit.
This time we did a bit better. The fellow pictured above is one of the characters you'll run across during the upcoming Great Fables Crossover. He's a Literal, and Russ Braun provided the visual design for him. That's all I'll say for now.
Posted by Bill Willingham at 3:45 PM

Awesome day at the range