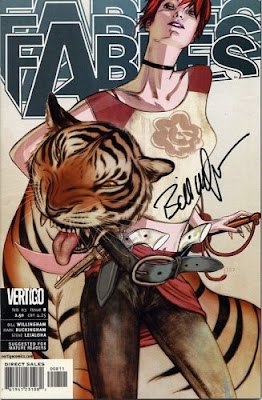 Since it looks likely this blog is shaking down to being a candid (meaning I admit my many blunders) examination of my career so far, you might want to take note of the following blog I found today, wherein someone else is doing much the same thing -- taking a detailed look at what is arguably the anchor-point of my current career.
David Bird, residing in the truly lovely city of Victoria, British Columbia (which is just about as far west as one can get in Western Canada) is running an issue by issue examination of Fables on his blog. The articles are called, appropriately enough, Issue by Issue: Bill Willingham's Fables. Each separate article makes a fairly in-depth examination of a single issue of Fables, beginning with the first one.
He started doing this just over a month ago and, by his own calculation, it will take him a good two years -- posting at the desired rate of one article per week -- to catch up to the current issue. As of his posting two days ago, he's up to the middle issue of the second story arc (Animal Farm).
So far this looks to be a fair and insightful exploration of Fables. Bird's comments are mostly on point, his criticisms valid, and his questions helpful.
You can find David Bird's blog at: david-bird.blogspot.com
If I was at all handy with a computer I would have actually posted a link you can click on, but I'm not, so I didn't.
Enjoy.
Posted by Bill Willingham at 11:41 AM

At what point do you start using the blog as a reference?

ps. I nominate Senor Sturges as a Fine Fellow.

I'm still figuring out what to use this blog for. Mostly I wanted to see if I could learn to post pictures and text on my own, without being hand-held by my more computer savvy friends. So far I seem to be using it as a confessional.

I like that he is using the autographed copy as the cover icon.