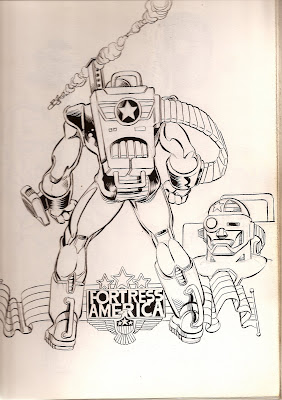 In the very same sketchbook, which was started at least two years before I began to think about the series Pantheon -- so this would have been around 1989 or '90, but don't hold me to that because my time sense is a bit spotty in some areas -- I also drew this character whom I called Fortress America. In fact, I had the name Fortress America first and tried to design an image to fit, unlike in the case of Dynasty, where I had the image in mind first and eventually found a name and an identity to fit. An armored character who has the word 'fortress' as part of his name has to be big and solid, and I think this fellow fit the bill nicely.
As you can begin to see, with this and the previous post, when I began to think about the series Pantheon, I went shopping among my old notes and sketchbooks for characters to people it with. If you're going to write or draw comics, or both, you have to keep notebooks and/or sketchbooks. This seems a no-brainer, but it took me a while to figure that much out.
Posted by Bill Willingham at 3:13 PM