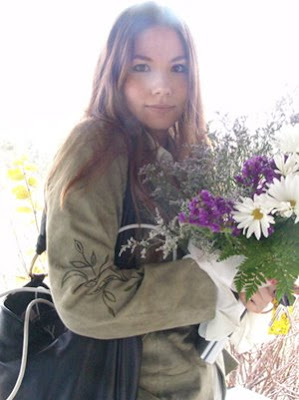 New York Times Bestselling author Marjorie M Liu is this week's Fine Fellow, most likely because I'm reading one of her books just now and so she's currently on my mind.
I met her only a short time ago, at the 2008 World's Fantasy Convention in Calgary (lovely town), where she was kind enough to give me several of her books (comped by her publisher to give out to her fans at the show) to read. She introduced herself as a Fables fan at the bar -- which is where most of the convention took place, in the sense that all of the real business of matching writers to publishers, editors and agents is done there. Okay, she reminded me then that we'd also met a bit more briefly at this year's San Diego show, when she came over to introduce herself, but I have a good excuse for not remembering her from that occasion. The San Diego show is a huge affair and I meet hundreds of people there for the first time on any given year. And I try to be on my best public behavior there, which means that breathtakingly beautiful women actually have a strike against them, as far as my remembering them is concerned. This is because, as I said, I'm trying hard to behave. The more heart-stopping you are, the more likely to be quickly scrubbed out of the old memory banks. Besides, Mark Buckingham is the big, shameless flirt at the San Diego show now. He has to be seen to be believed. And oh my, oh dear, oh lordy how he can exude innocence, harmlessness and bashful sincerity -- a talent I could never quite develop with any finesse. Even if I tried to compete, he'd leave me in his dust.
Sothenanyway, I met Marjorie at the Calgary World's Fantasy Convention and she gave me some of her books to read. I'm in the middle of her first one right now and find myself in awe of her ability to put words together in sparse but entirely engaging and evocative sentences. Look at this line from only the second paragraph in her novel: The world trickled light. If I could craft a sentence so simple and yet so compelling, I'd really have some confidence, now that I seem to be intent on entering the prose fiction trade.
The book is called Tiger Eye, and it's about what happens when a young woman gets caught up in a world of supernatural danger and intrigue after innocently (she thought at the time) purchasing a demon-filled Chinese riddle box at Beijing's famous Dirt Market.
Tiger Eye is the first of her Dirk and Steele series, all of which are described (by her or the publisher -- I'm not sure) as paranormal romance thrillers. I'm pretty confident I'll be reading the other books in the series, which include, Book Two: Shadow Touch; Book Three: The Red Heart of Jade; Book Four: Dark Dreamers; Book Five: Eye of Heaven -- and so on, totaling seven books so far in this series, plus books in two or three other series she's started. She's very prolific.
Confession time: I doubt I would ever have picked up one of Marjorie's books, had I not met her in person. The reason is they're categorized as Romances, which is where they are shelved in bookstores. Though I have no justification for avoiding it, the romance section is an area in bookstores I seldom wander into. Her novels also have traditional-looking romance book covers, which are occasionally a bit off-putting to us mighty manly men. Then again, who knows? I don't carry many biases where good storytelling is concerned. I'm willing to find it anywhere, as too many of my friends will attest, when I try to drag them to wonderful movies that they aren't eager to go to, simply because they fall under the chick-flick rubric. So, in any case, I'm glad I did meet Marjorie Liu in person, because it would have been a shame to miss out on the work of an author this talented due to whatever degree of cultural prejudices I might still possess. I trust you who read this won't make the same mistake.
Marjorie writes, and as long as she does, I'll continue to read. I believe this more than qualifies her as a truly Fine Fellow.
If you want to learn more about her -- and there's tons more to learn -- go to her website at: marjoriemliu.com
Posted by Bill Willingham at 3:54 PM

I love the paranormal romance genre, and she's not an author I've read, so thanks for the recommendation. And of course you write wise words, good stories come in all genres.

I've read all Marjorie's books and they only get better. Now that your eyes have been opened, I hope you'll enjoy all the romance community has to offer, be it paranormal, suspense, historical, thriller, mystery. And remember, Romance is not a four letter word, even for a manly man like yourself. :)