A page from my first comics work... 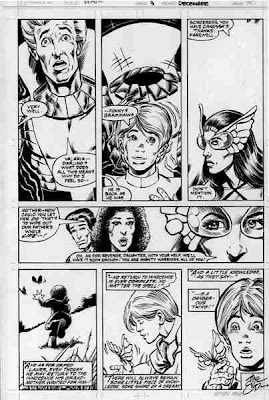 Some of you who know my career too well might argue that those D&D ads in the back of Epic Magazine and Marvel Comics were my first comics work, but you'd be wrong. More about that someday... maybe.
My first professional comics work was with First Comics, an upstart comics publisher based in Evanston Illinois. They published a comic -- their flagship comic -- called Warp, based upon an odd stage play, made only vaguely interesting by the Neal Adams production drawings and costume designs.
One of the characters in Warp was named Valeria the Insect Queen. In issues 8 and 9 (or maybe 9 and 10 -- I'm going by highly faulty memory here) of the comic they gave her her own backup story and allowed me the opportunity to draw it. Here is one page of the results. I believe this is the last page of the two-part story.
I'd like to say I have mixed emotions about this page and about that job, but I can't. I've no lingering fondness for it and can only look at this page and the others from that job in a steady state of full-cringe. My artistic influences of the period controlled me to the extent that, though I can't go so far as to say they constituted plagiarism, I also can't say I was doing my own work. A talented young man named Bruce Patterson inked this job (though it may have been Pattersen, and then again it may have been someone else entirely -- I've tried so hard to forget these years that it's not easy now to resurrect them), and he covered up many of my sins.
You can see in the upper part of the third panel that a character is missing. I'm not sure who or why. I barely recall the story. But in the old days of comic production -- the pre computer days -- corrections were often made by photocopying art and then literally pasting the copy down on a page. That is how we moved visual elements around on a page back then. My guess is that a photocopied paste-up of the missing character fell off of the original art page, when the glue dried and dissipated over the years.
At the same time I was producing these pages, I was drawing the first ever Elementals 20-page story that would eventually be printed as the backup to the short-lived Texas Comics' Justice Machine Annual # 1 (and only, as it turned out). That work is less horrifying to me now, only because it was my own work for the most part. The terrible mistakes I made on the Elementals stuff were at least my own mistakes and not someone else's.
But this Warp backup job counts as my first comic book work, even though I was doing Elementals at the same time, because it was published first. I would go on to do several additional backups in Warp, none of which are worth trying to find.
First Comics doesn't exist anymore, nor does Texas Comics, Noble Comics (the first of the independent comics companies that tried to publish my work and died before being able to do so), or Comico. All of the small independent companies I worked for, or tried to work for, in the early years of my career are gone now. There's a lesson here for someone. DC, are you listening?
Posted by Bill Willingham at 9:58 AM