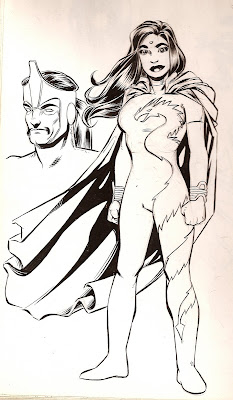 This is my first run at drawing the character Dynasty, who would later star in the 13 issue maxi series Pantheon, published by Lone Star Press. I'm still quite fond of this design and by this time I was beginning to get results I liked with the inking brush. Of course, by this time I had no idea who the character was or that she'd be named Dynasty. I only had an image in my mind of the dragon symbol wrapped around one leg, before showing up on her chest, where most self-respecting superhero symbols appear.
I think it's sort of humorous that several critics of the Pantheon series went out of their way to point out what they considered a mistake in the character design, because the woman was clearly (East) Indian, but the dragon design was obviously Asian. Apparently, according to these critics, I don't know one culture from another. So let's get this straight: American superheroes can adopt all sorts of symbology from other cultures, but non-American superheroes are required to stick within the culture of their origin -- period. Got it. Understood.
Do I work in a silly profession, or what?
By the way, the character to the left of Dynasty was going to be a superhero called Unicorn -- part of the super team called The Bestiary. But the Bestiary never actually made an appearance in Pantheon. I intended them to, but simply ran out of room. Though they were referred to once or twice in other character's dialogue, they ended up on the funnybook equivalent of the cutting room floor. That happens.
Posted by Bill Willingham at 2:59 PM