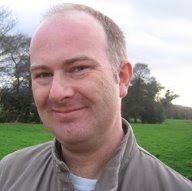 Every Sunday, as often as I can remember to do it, we're going to post the Fine Fellow of the Week award. This carries on a tradition begun back in my TSR days (they were the publishers of Dungeons and Dragons way back before the company was bought out far too many times, until eventually it seems to have been passed around more often than one of Huggy Bear's -- ahem -- business associates). Those of us who worked in the downtown building, which was where all of the creative side of the D&D business was done, would elect a Fine Fellow every week. Ballot box stuffing was not only allowed, but encouraged.
So, because I'm all about maintaining personal traditions, we're going to continue the practice here. Note that the Fine Fellow can be either male or female, and actually doesn't even need to be human (a precedent set by Time Magazine when they selected the personal computer as their Man of the Year). Our Fine Fellow can even be fictional.
In the future, feel free to propose candidates for the weekly Fine Fellow award. You can vote for yourself, you can make any argument in support of your choice that you can imagine (and the most imaginative arguments will be given the most consideration), and if you can find a way to stuff the ballot box in our digital age, then by all means do so.
This week our inaugural Fine Fellow can be no one else but the merely marvelous Mark Buckingham. Call him Bucky, if you like, not because he fearlessly backed up Captain America back in the big one, only to fall prey to the evil machinations of Baron Zemo (although I wouldn't put it past the always-surprising Mr. Buckingham, esquire), but because it's a nickname he seems to like.
For those of you who're fans of my long-running Fables funnybook series, he needs no introduction. For everyone else, Bucky is a comic book artist of amazing talent, and smart as a whip. He's introduced so many good ideas to the Fables series that I couldn't begin to list them here. It wouldn't be at all unreasonable for readers to simply assume that any good idea in Fables was quite likely one of his. And Bucky is nice -- arguably the nicest man in comics (although Gene Ha and Zander Cannon could also wrangle a few well-deserved votes in that category -- but they are perhaps Fine Fellow candidates for another time).
Mark Buckingham, my partner in crime, my friend, and one of the small handful of people I most admire in this world, is an artist without peer, who lives in Spain with his alarmingly lovely wife Irma. He is, in every important respect, a truly fine fellow.
And yes, I am fully aware that this was posted on Saturday, but this was the moment I had a spare moment to attend to this, and seriously, Bucky is such an exemplary Fine Fellow, that he deserves the extra day in office.
Posted by Bill Willingham at 10:42 AM

Dear Bill,
You are far too generous!
Thank you so much for awarding me the honour of being your first "Fine Fellow of the week"!
And I appear to be the first to post a comment on your Blog too. Hurrah!
Well... it seems I really am the only person left in the world not Blogging. I must do something about that asap.
Your Friend,
Bucky

Excellent choice, Bill. So how is the nomination process going to work? We just nominate in the comments?

Can we nominate Bucky again for next week? He really is that good. PLUS Thanksgiving week is a short week so although he got an extra day with Saturday, no one is really going to be around tonight, Thursday, or Friday, so he's losing three days there.

Chris, you can nominate anyone you want, for any reason you want, in nearly any way you want. You can even cheat, if you can find a way to do that. That's the truly fine nature of the Fine Fellows award.