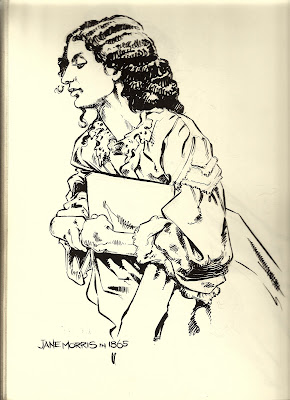 Many of the members of the so-called Pre Raphaelite Brotherhood, a movement that came along decidedly post Raphael by the way, kept drawing this one woman named Jane Morris. Some used her as the model for whatever painting they were doing, while she simply shows up in the sketchbooks and discardia of others. When I finally ran across an actual photograph of Miss Jane Morris, I understood why, and had to copy it for myself. Captivating woman.
At this time I was just beginning to get a wildness to my brushstroke that I liked and continued to pursue and develop. If I can ever recapture it someday -- it faded when I stopped drawing as much as I was doing back then -- I'm going to try to introduce it to my comics work. Assuming I can ever get around to drawing comics again.
Posted by Bill Willingham at 3:29 PM